Castor Oil Hair Growth Before and After: A Reader’s Testimony

Castor Oil for Hair Growth Before and After impressions: Read more on how one of my readers finally solved her hair problems using this one ingredient.

Several months ago I had the chance to meet and talk to one of my regular readers. We met entirely out of the context of my blog but somehow got up to talking about hair care and shared some interesting insights. Even though she was very nifty when it comes to various uses of oregano oil and lemons, she had never before used castor oil on her hair. As she complained about having problems like dandruff-prone scalp and particularly dry ends, I definitely recommended her trying out some of the things I incorporated into my hair care routine and let me know how it turned out for her.

I even showed her some of my castor oil hair growth before and after photos. So several days ago she texted me some of her insights and I was delighted because of two things:

As her hair type is somewhat different than mine in terms of color, texture, and length, I thought I might share her thoughts with you in hope that maybe some of you will also find this helpful.

What her problem was

Compared to my hair, this reader has darker and considerably more dry hair.

She trims her hair 4-6 times a year as her ends tend to look particularly untidy if she lets them go too long without a trim. She tried solving this with several commercial products and a couple of coconut oil based recipes, but without much success. On top of that, her super sensitive scalp tends to irritate her, which results in dandruff almost any time she tries out a new shampoo or starts eating more junk food.

Because of the dandruff and the irritation, she tends to lose a lot of her hair. In order to avoid any additional hair loss, she avoids curling irons, aggressive hair dryers, and even hot rollers.

All of this significantly affects her hair growth, which she finds particularly frustrating as a huge lover of longer hair.

Focusing on the cause instead of the result

Just like with anything else in life, you have to create suitable conditions in order for something to grow and develop.

In the case of my reader, she had to create suitable conditions that her scalp and her hair would like. That’s the only way she would be able to notice the progress in the length and quality at the same time (let’s face it, length without quality just doesn’t look and feel good).

The cause: her hair and her scalp weren’t nourished the right way. Which is not so unusual these days, as our stress levels and inadequate nutrition can have quite an impact on the state of our hair.

Starting out and initial results

She started out by using castor oil mixed with coconut oil twice a week, as per my suggestion.

After her initial try, she noticed her hair looked a lot shinier and her ends felt particularly soft to the touch. After a couple of weeks she noticed that dandruff, though still existent, was not as visible as before, and her scalp felt less irritated. 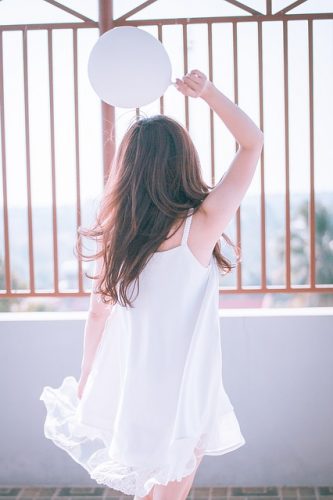 A great thing I love about castor is that it shows first results so quickly, giving you motivation to keep going. It’s those long-term results that matter the most, after all. And in this case, we were definitely going for the long-term results.

The state of her hair now

Today, nearly 5 months after her initial encounter with castor oil, she’s using castor oil only once a week. She doesn’t feel the need to go for more.

Her hair finally feels and looks better. But as fall always seemed to be the worst season for her hair, she will continue to pay attention to how her hair reacts now and go back to twice a week in case she finds it necessary. As her irritations haven’t been raging for a couple of months now, she noticed less hair loss. Meanwhile her baby hairs even started blooming! Soon she’ll notice the change in the thickness, too.

And as castor oil also helps maintain the moisture levels, her ends seem to be in much better shape. In so much better shape that she even skipped one of her regular hair appointments. That also means that she managed to keep some of her length, which was her original goal.

The secret behind her results

Castor oil isn’t some kind of a magic potion. However, it has been used as a natural remedy throughout centuries for a reason. And the reason for it is ricinoleic acid.

Ricinoleic acid is basically responsible for the majority of positive features of this oil. It protects hair follicles, boosts blood circulation in your scalp, and helps your hair keep the moisture it needs. These results were incredibly important in the case of my reader.

In addition, castor oil contains some of the omega 6 and 9 fatty acids our bodies are particularly fond of.

What we can take from this example

Final thoughts: Castor oil hair growth before and after

When it comes to castor oil hair growth before and after results, I think we can be pretty optimistic. As castor oil isn’t a one way solution, but helps with different problems in terms of hair growth and hair care in general, there are solid chances that it can also help you in case you are struggling with hair growth.

I know it works for me, and I’m so glad to hear that someone else has the similar experience. If not a better one, considering her previous hair issues.

Disclaimer: Pictures seen in this article are not those of my reader who was not inclined to share her own pictures.

5 Jamaican Black Castor Oil Uses that will strengthen your hair and make them even more beautiful. Explanations, tips, and recipes inside! What is Jamaican...
Read more
Hair

Castor Oil for Scalp Health | Nourish Hair at the Roots

Nourishing your hair by using castor oil for scalp is a great way to keep them healthy. Read on to know more about common...
Read more
Hair

Get a peek into the DIY world. Create your own Castor Oil Shampoo and Conditioner. 2 recipes for a boosted efficiency with the best...
Read more